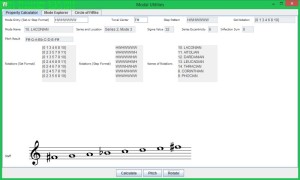 Over the past few months, I’ve had an ongoing side project. I have been developing a Java program called Modal Utilities, designed for the speedy identification of heptatonic modes. Upon entering the step formula or pitch class set of a mode, Modal Utilities will give you the catalog number and name for the mode out of my heptatonic modal catalog, the mode series to which it belongs, several other useful properties (sigma values and series eccentricity–more on those later), and the data for rotationally-related modes in the same series. If you also insert a pitch to act as the tonal center of the mode, the program will spell out that mode from that point, give you the relative key signature (“inflection sum”) and give you a staff representation, to boot.

As of tonight, Modal Utilities reached Version 0.1.5, with improvements to the GUI, and the addition of the “Rotation” button, which will rotate the mode up through its series. Still quite a way to go with this project–those other tabs you see at the top are non-functional at the moment–but it should give you some idea of where this project is headed. It’s designed to be a supplement to my long-running plans to codify my (rather heretical) brand of modality in book form, a project which has progressed quite a bit of late.

I’ll have more about Modal Utilities and the other theoretical developments in the near future. Stay tuned.